Lately it has been sort-of hit or miss with {7QT} but I’m here today!  Check out other more motivated bloggers at Kelly’s!

At any rate, one of the paramount aspects of our political system is a peaceful transition of power (another thing many countries in the world do not have – hello Gambia).  So, like him or hate him, ecstatic or morose (or, I guess, the negligible percentage of Americans who just plain don’t care one way or the other about him according to the media), President Trump is the newest leader of this great nation and the amazing people within.

I got a new phone.  I didn’t want to, my Samsung Galaxy III was working just fine, thank you.  Except for that I couldn’t get picture messages and it deleted all my contacts on me.  Hubby wanted to graduate from a 2000’s-era flip phone to something a little more sophisticated, for work, you know.  And since we were on different carriers, two different bills, two different kinds of coverage, we decided to simplify the matter by just getting matching phones.  Which is our romantic way of celebrating Valentine’s Day early.  (Isn’t that how the Millenials do it anyhow?  Skip the flowers & chocolates, opt for Apple products?)

My baby turned 2 earlier this month.  Supposedly, she is our last one (according to Hubby, but I could easily be talked into another!) so I am going through the whole gamut of emotions relating to that and all my babies getting older.  Of course, kids growing older comes with its benefits obviously: they can strap themselves in the car, put on their own clothes, and can generally follow directions.  But, baby-lover that I am, I miss those days of little bundles sleeping all day and cuddling while breastfeeding.   I am getting more sleep these days, which is a plus.  But….still.  Sigh.

………….I am whisper-typing this, in case the Universe decides to play a trick on me….but I *think* I can claim victory on the Spike Potty Training journey.  He has been a trooper since Christmas, with accidents few and far between.  He really does excellent when we are out and about in town, it’s mainly when he is at home and distracted by tv or a complicated Lego creation that he sometimes forgets to go until it’s too late.  Yay!

In just a few short weeks it will be….SIX MONTHS TO EUROPE!!!  More on that later.  So excited!!  It is really feeling more real now that everything is coming together, tickets have been purchased, reservations have been made.

One of the hardest things about living so far away from family is that you are not available to help in times of need.  Two days after Christmas, my mother fell and broke her leg really badly.  She is extremely independent and lives on her own, so this has caused her to completely reorder her life (including her willingness to ask for and receive help).  She is now recovering from a successful surgery but will be unable to bear weight on the offending limb for a few months.  In the meantime, my geographically-closer siblings have really stepped up to the plate and helped her with transport and shopping and stopping by to check on her morning and night.  My sister has taken on the bulk of this, for which I am really appreciative, because it is next to impossible for me to drop everything here and go there, what with kids in school, a husband on back-to-back business trips, as well as financial concerns.  It is hard feeling so impotent when it comes to helping out.  Anyone have any experience with this?  When you are unable to physically be there for someone, how can you Be There for someone?  Aside from sending money, what are some things I could do, both for my mother and my siblings who are taking on the responsibility for caring for her?

It is forcing me to think differently about our society’s definition of “success” as well as how to take better care of myself.  Huffington’s main mantra: Get enough sleep.  So I am trying.  The goal is to go to bed earlier so I can get up at 6 with the kids before school after getting a healthy 8 hours of sleep.  So far, so good.  I am hoping that in the long run I have more energy and am more focused.  Generally, I stay up late at night to “get stuff done”(which, incidentally, is what my mother always did growing up – and subsequently was a zombie all day) and then proceed to hit a slump shortly after lunch, where the world looks bleak and I am too tired to function.  Yesterday after 8 hours of sleep I didn’t feel that slump, which was awesome!  Hoping that will continue.  I will keep you posted.

Hello!  We survived a scary week of Halloween being on a Monday.  It was rough,  and I can imagine even more so for my children’s teachers – having to get through an entire week of dealing with candy-addled youngsters.  I salute you, teachers.  Your courage and fortitude is beyond my capabilities.

What is scarier than kids hopped up on candy??

Here is what else has been going on around here:

I realized that I am becoming a Bah-Humbug Halloween mom.  This is so extremely sad because, generally, I love Halloween.  It’s one of my favorite holidays, and not for the whole pseudo-occult-scary-zombies-and-skulls-everywhere reason.  I just like to dress up.  But this year, the day before Halloween, as I was rushing around trying to find all the pumpkin-carving tools and laying down newspaper on the table while trying to remember where I put the battery-operated tea lights, it occurred to me that THIS IS JUST TOO DANG MUCH WORK.  And, of course, the kids are running around in crazy anticipation of things to come (i.e. candy) like wolves who get a whiff of a wounded elk two miles off.  Of course, I suck it up and remember that this holiday is for them, not me, and power through.  But I lament the fact that I can’t seem to find the joy in Halloween any more.  I will need to work on that (and don’t even get me started on Christmas!)

Hubby and I met 16 years ago at a Halloween party at his college fraternity house.  I was a cowgirl….he was a  – flasher [because what other Halloween costume can you make up with things you already own – a coat and boxer shorts (luckily he was a G-rated flasher)? – excited to try to explain that one to our kids later…] but it always makes the Halloween season special for Hubby and me.  I like to try and go out to eat or something to celebrate our Anniversary of Meeting.  This year, we did something different and went to a sip-and-paint place (you can bring wine in and everyone in attendance gets instruction about how to paint a specific picture).  I had been there once before with my girlfriends, but I was pleasantly surprised how my analytical, science-minded husband really took to the creative experience.  He was really excited about his painting afterwards and talked about the experience for DAYS.  It was really a fun date night. 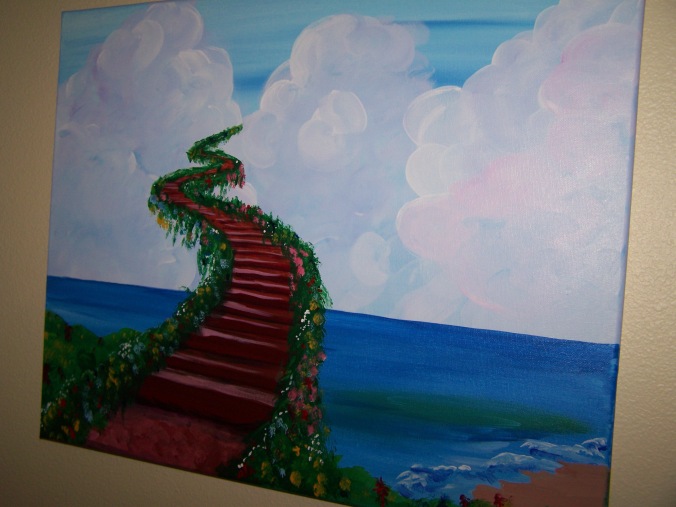 He’s a better artist than me…his steps had WAAAAAYYYY more structural integrity than mine.

Yeah. So…my couch smells like urine.  I am so done with this “potty training” stuff with Spike.  He turns 4 in a month and I am pretty sure he will still be peeing his pants then.  We have tried everything.  Pull-ups are glorified diapers, people.  I have never successfully used them to potty train.  So we are just going the underwear route, along with a “potty timer” so that he has to at least try to use the toilet every 45 minutes.  This works well, except for when ha! Mommy forgets to reset the timer, or, he has the urge to go between timer dings.  Apparently I need to give him VIP-escort to the bathroom whenever I read his mind that peepee is coming, or no cigar.  Grrrrr!  Junior was a pain to potty train as well.  Bellie, on the other hand, was a breeze.  (She was so embarrassed about pooping in her auntie’s bathtub that she instantly decided poop would never again go anywhere but the porcelain throne.) 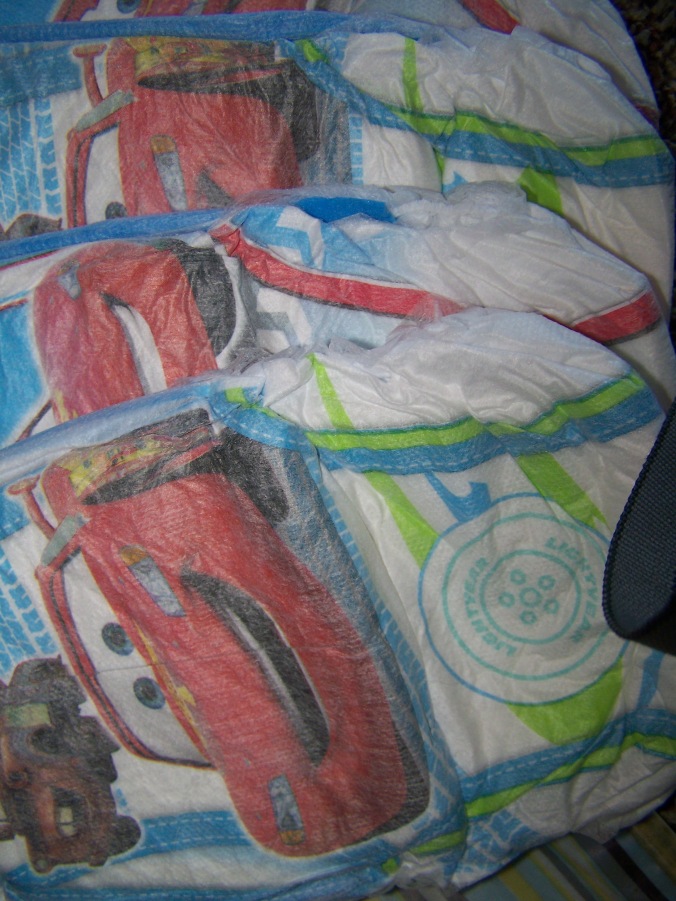 I ordered my Christmas cards already!  I am totally on top of things.  Of course, they will still probably not be mailed until the day before Christmas, but it’s the intention that counts, right?

That is how many baskets of clean laundry I have in my living room that currently need folding.  Ugh.  Sounds like a Friday Fun-day activity.

We are hardly ever out and about after dark around here and the other day I had to run Junior to karate with the other kids in tow.  The sun had gone down and it was getting darker and Spike worriedly asked me if we were still going to be able to find our way home in the dark, or if we were lost.  It genuinely concerned him, and I was glad I could put his mind at ease:-)

I hope everyone remembers to vote on Tuesday!  Hubby and I were having a conversation about the upcoming election and he remarked, “I don’t think the country has ever been more divided in an election before.”  Of course he is not a history major, but I had to remind him of the election of 1860… 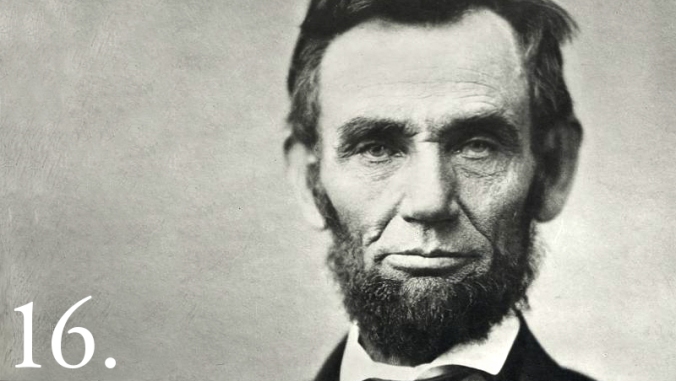 …at least we’re not to the point of secession – at least not yet.  God Save Our Country!

And God bless you all in the coming week!

Be sure to stop by Kelly’s for more fabulous Quick Takes!

This Ain't The Lyceum

The Art of Simple

Life Your Way
Keeper of the Home